Amongst some of the sea paddlers at Glam Boaters there is an 'in' joke that some people take up cliff walking after paddling with Taran, today was my turn to experience that feeling.

We had arranged to paddle form Sully to Penarth, not a long paddle by any means but it was going to be a bit of a slog against the prevailing South Easterly wind.

Arriving at Sully Taran was nearly whooping with excitement when he saw the western tip of sully island, to be honest, at that point, I can't say I shared the same enthusiasm.

We paddled out, Taran charging into the playground and me cautiously making my way to try and skirt around it via a much calmer route. When I did eventually have a peak around the corner I saw even bigger waves, I quickly made my mind up that the only way I was going to get around the island was on foot.

As I turned my boat I caught sight of Taran playing in the race, his boat was pretty much vertical on the face of a wave, and I could see water from bow to stern, it was one big wave.

(Apologies for the quality of this one but something was up with my camera, not focusing and making everything curved. The little black spec on top of the wave is Taran)

After completing my 'walk of shame' I was back on the water and paddling into the wind. Not long after this I found myself walking yet again, I had spotted the Rannies and they looked messy.

By now I was getting good at this walking and shame action I had going on. 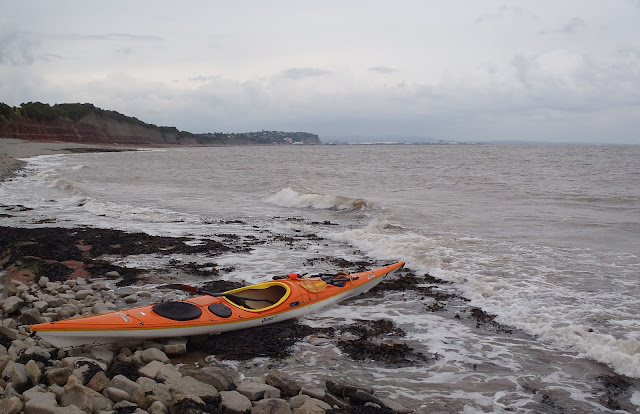 After an eternity I manage to find a suitable launch spot for my kayak and continued on to Penarth.(I think my camera was playing up again as it's flattened the sea this time)

I have to admit though this leg of the journey was the roughest conditions I've paddled in since starting sea kayaking, it was uncomfortable and it certainly tested my comfort levels not to mention my low brace but in some respects was fun in a bizarre way.


Cliff walking ?  Not for me just yet anyway.

I reckon after getting your kayak vertical in the surf at Aberavon & rolling back up sets you up nicely for some bigger stuff :D

Hi,
Will you please post a link to your Blog at The Kayaking Community? Our members will appreciate it.
Members include: Kayakers, Kayaking Experts, Guides, Clubs, Groups, Etc.
It's easy to do, just cut and paste the link and it automatically links back to your website. You can also add Articles, Photos, Videos and Classifieds if you like.
Email me if you need any help or would like me to do it for you.
Please feel free to share as often and as much as you like.
The Kayaking Community: http://www.vorts.com/kayaking/
I hope you consider sharing with us.
Thank you,
James Kaufman, Editor

Thank you for posting here. It would be my pleasure and an honour to share the contents of my blog with The Kayaking Community. At present I am redeveloping the site and hope to go live shortly with a fresh look and additional content which might be useful to some of your readers. I will link the new blog to your site then,the contents here will be transferred so nothing is lost. Hope that is Ok.