It all started with a text, just a simple one to Taran congratulating him on winning a very nice new Valley Etain. A few texts later and I'd swayed him to join me on a trip down west. I'd been wanting to do this part of the coastline for some time now but I hadn't envisaged doing it quite the way Taran had. His plan involved me, yes me, CAMPING, and in March. (It was only a few weeks ago that I made a comment about camping in February brrrrr and here I was weeks later contemplating it myself). There followed a frantic rush to get bits of camping kit I remembered having, but were now lost around the house after years of non use. Eventually I managed to sort my gear and began to pack my boat, camping wasn't going to be the problem, sinking was, my boat was that heavy. 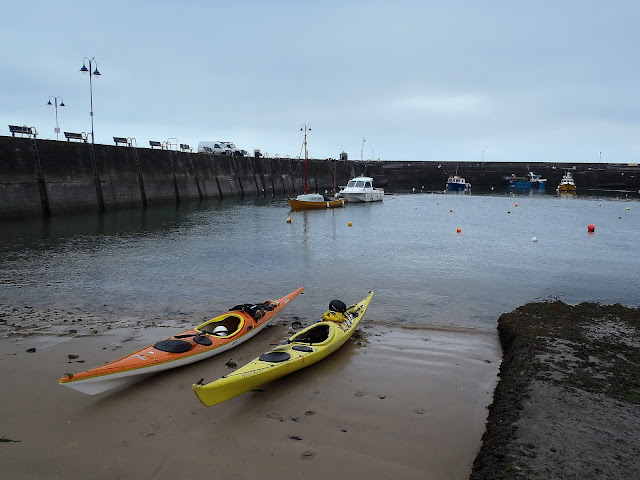 Seconds away from the moment of truth, it could be a very short trip indeed. 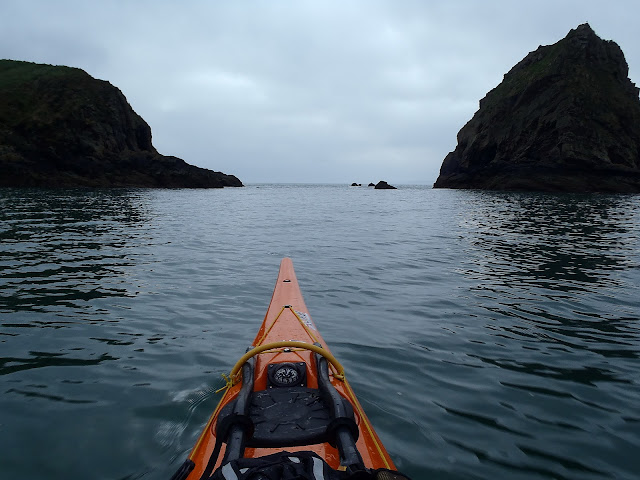 Amazingly it floated, and I began my first adventure in the Celtic Sea. By the time we had got to this point I was beginning to get used to the weight of the boat and the different handling characteristics, good job really because we would be paddling dirrectly into the wind from now on. 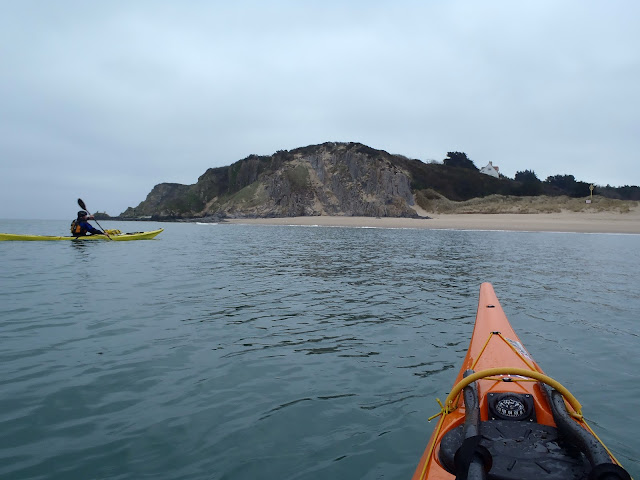 Approaching Caldy Island. And I notice Taran has put his helmet on, mmmmm always a cause for alarm, something going on that I hadn't noticed. 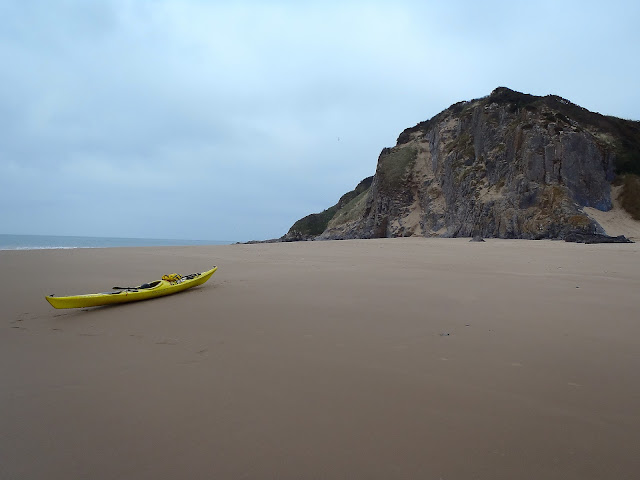 Nope, nothing going on, he just wanted to get out of his boat quickly after landing on this stunning beach. I've never been to Caldy before, it looked amazing but there was no time to explore today we had to crack on. 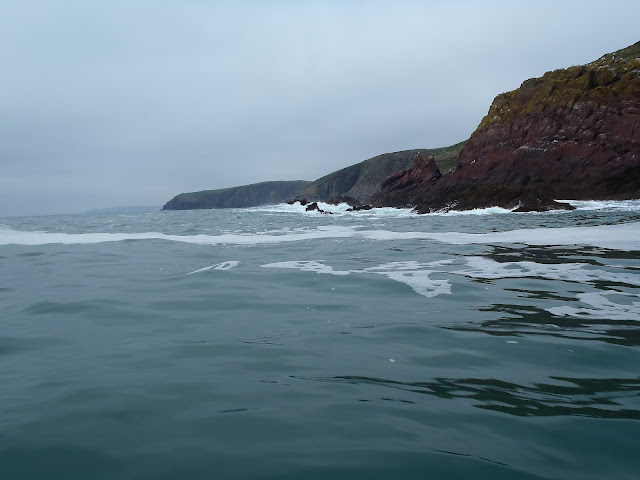 On leaving the beach we were once again exposed to the wind on this dramatic coastline which really epitomised the rest of the journey. 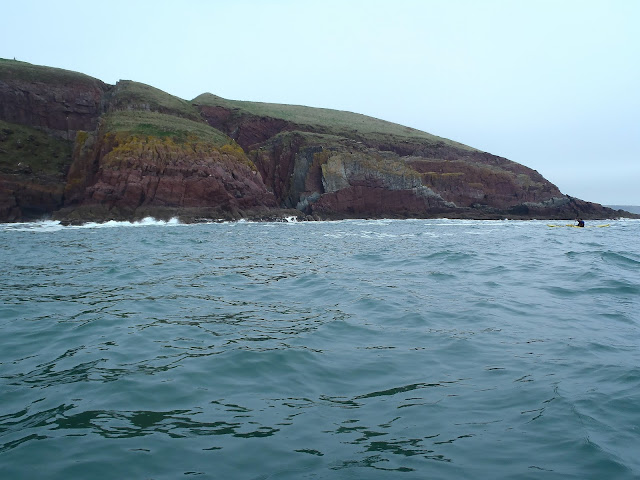 The colours in the rock layers were also very striking. 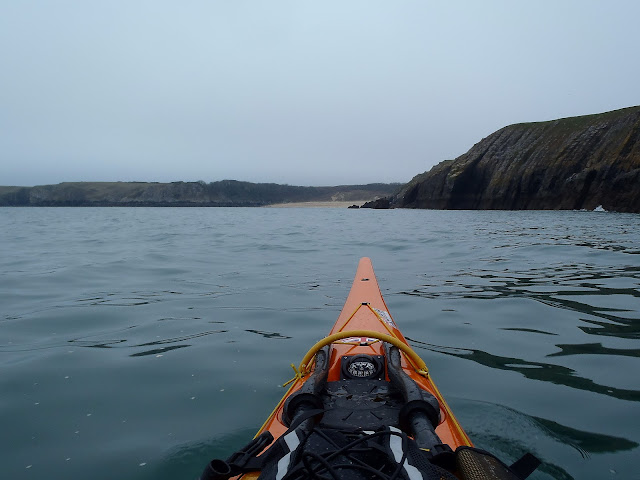 Eventually our home for the night comes into view. 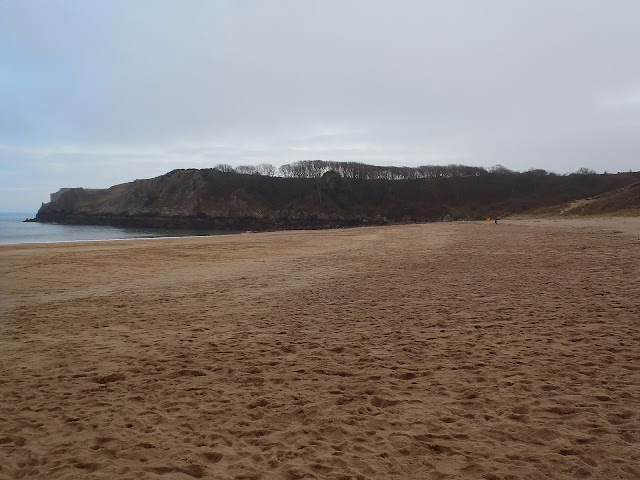 After setting up camp I get an imprompttu lesson in bushcraft from 'Ray Tyla', that is after he'd stopped laughing because I'd brought a pillow with me, oops, apparently a camping faux pas on a much larger scale than bringing a suitcase. 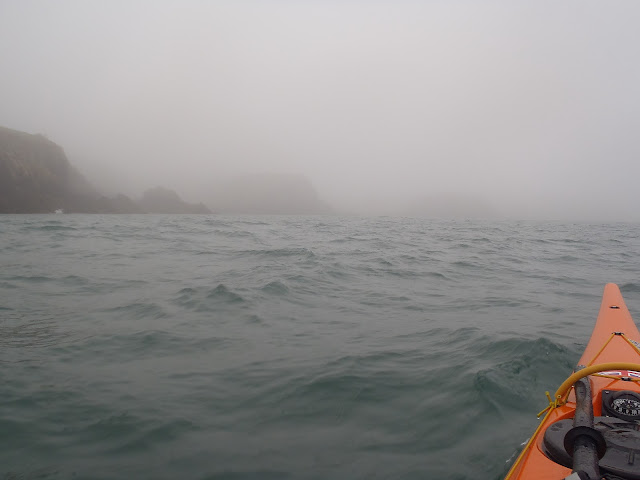 After a good nights sleep (the pillow made the difference) we set off into the eerie mist that had decended overnight,  shapes began to loom up just on the verge of vision making it a very atmospheric paddle. 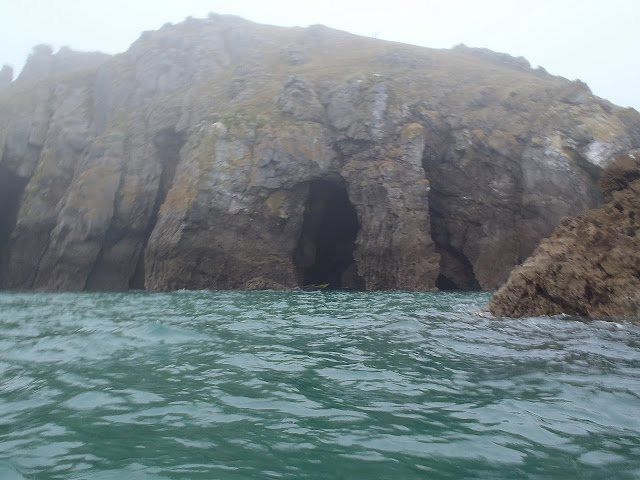 Taran finds a cave to have a play in. 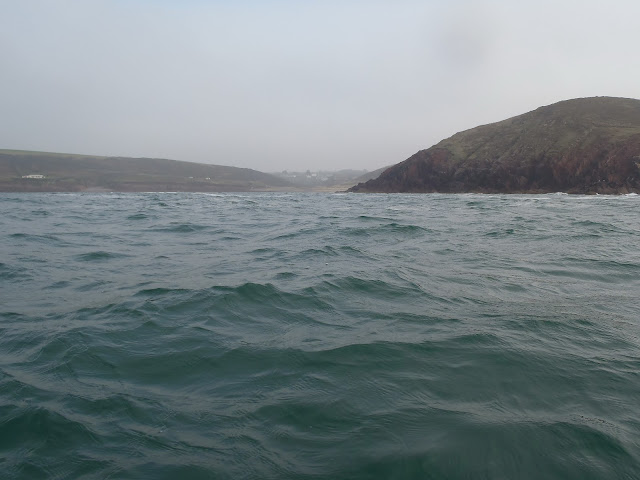 We decide to stop for a break at Manobier, thankfully not much surf there today. Somehow though we both manage to catch the same ride in, I could see what was going to happen so I break left and we both avoid a collision. 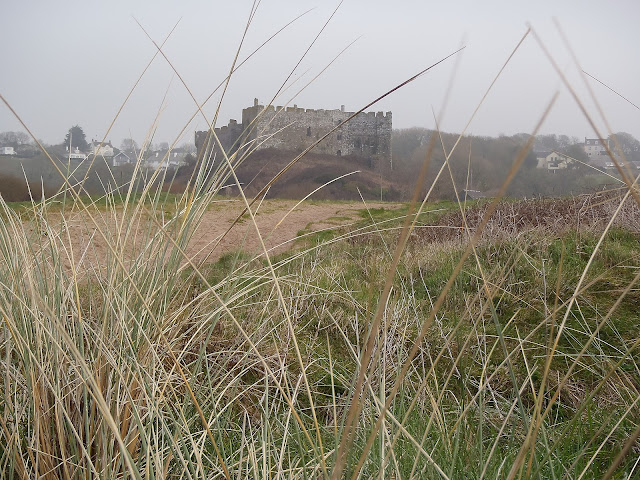 The Norman castle at Manobier, constructed in the 11th century, with the stone fortifications added in the early 12 century. 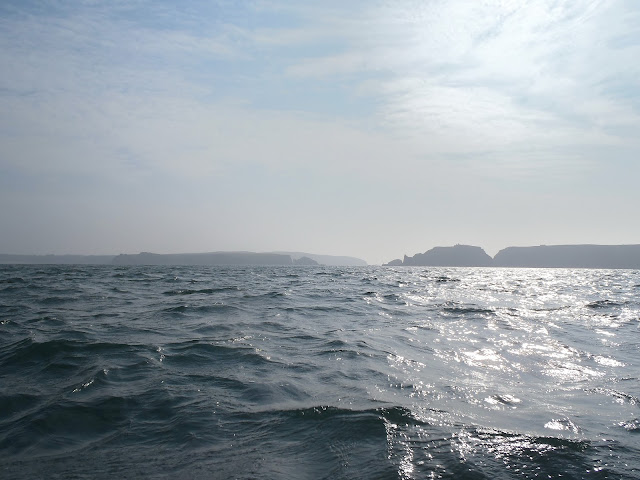 We continue on from Manobier, the mist has lifted and the sun has come out happy days indeed. 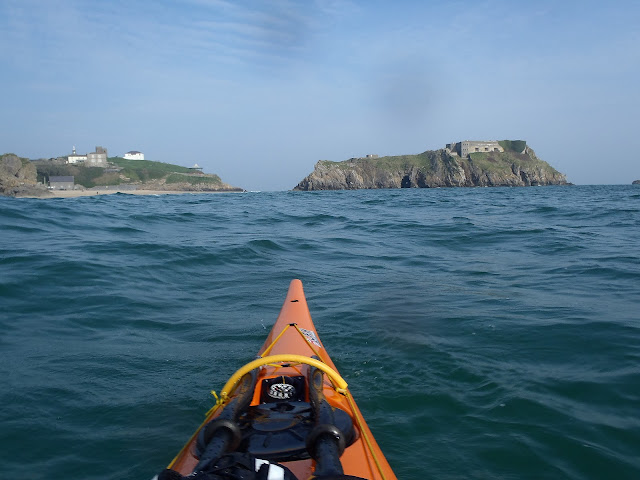 Approaching St Catherines Island, to tired to go around so instead we decide to go through it. 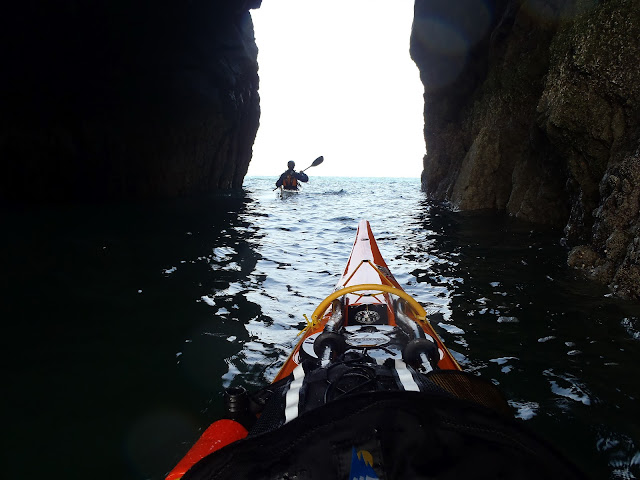 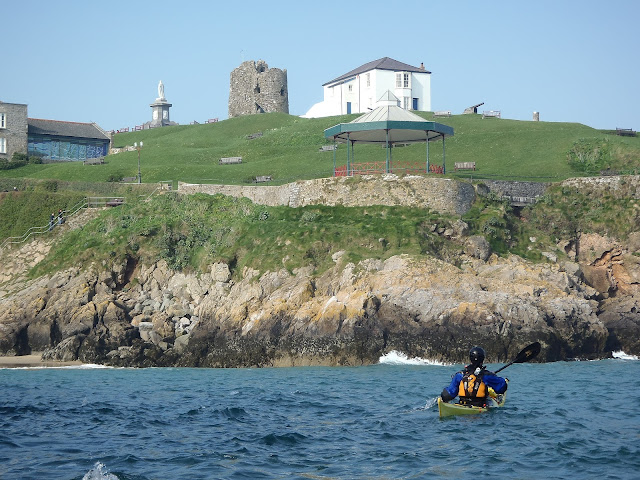 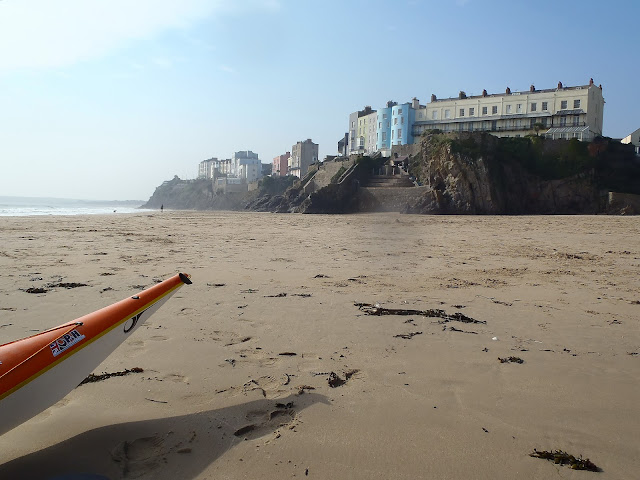 A welcome break for a quick coffee and some chocolate on the beach at Tenby. 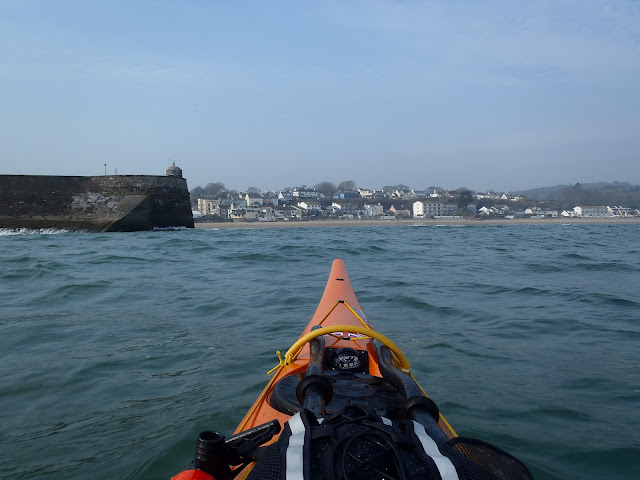 And shortly afterwards we arrive back at Saundersfoot, both totally shattered. I thorougly enjoyed this adventurous paddle a first for me on so many different levels, thanks Taran for planning this one I certainly wouldn't have been as ambitious.

Ray Tyla (LOL), at least you didn't mention me resorting to my camp stove to light the fire.

I know and I also forgot to mention it took 2 hours to light. :)

Looks a nice piece of coastline - not been from Lydstep to Stackpole yet - will make amends shortly. Did you contact the range control as you went through the Manorbier Firing Range?

Both, thank you for taking the time to have a look at my blog.

Jules, It was my first cave in a seakayak, I can see the attraction. We passed plenty more so you'll have to get yourself down that way if you haven't been already.

Eurion, we both checked the range before leaving and they weren't firing, it was a bit worrying though to hear explosions and then small arms fire in the distance as we approached the Manorbier range but that was quiet, Castlemartin was is full swing, thought we were entering a war zone.