Time is my biggest enemy, I just don't have enough of it. As recent events have been conspiring to keep me out of my boat I have become a bit desperate to get back on the water, I was adamant that I would snatch at least an hour or so today but with a forecast of Force 5 to 7 and rough seas scheduled for the Bristol Channel my options were limited. So with decision made I headed off yet again to Cardiff Bay. 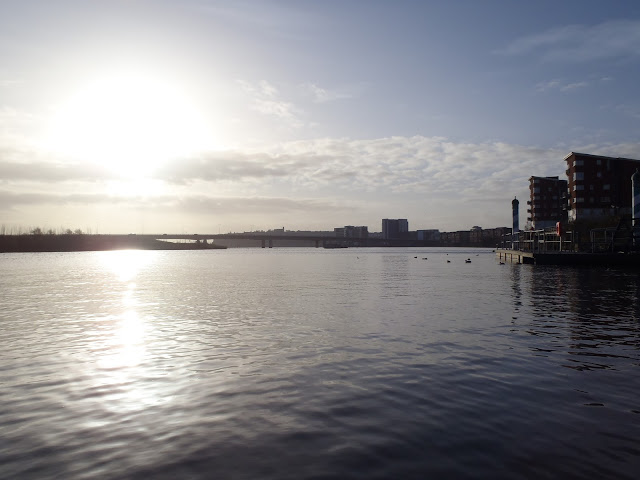 Absolutely flat calm and to be honest a tadge disappointing, I was hoping to do some practice in slightly bumpier conditions, building on from a previous adventure Lost Property  but beggar's can't be choosers. 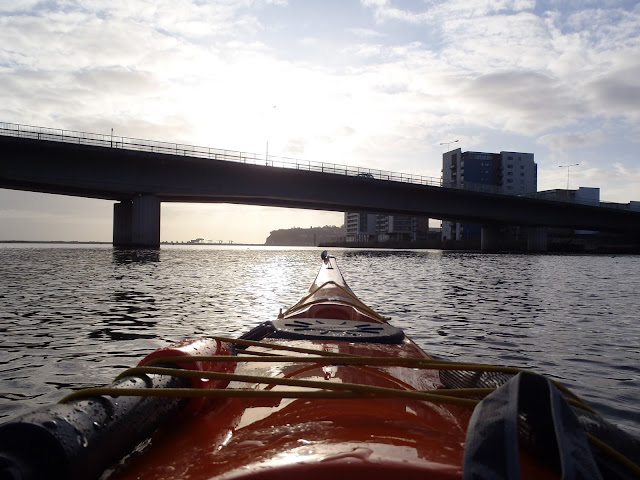 Approaching the bridge I stop and have a mess about with my camera. I then make my way in the direction of Penarth Yacht Club straight across from the metal pole you can see in the distance. 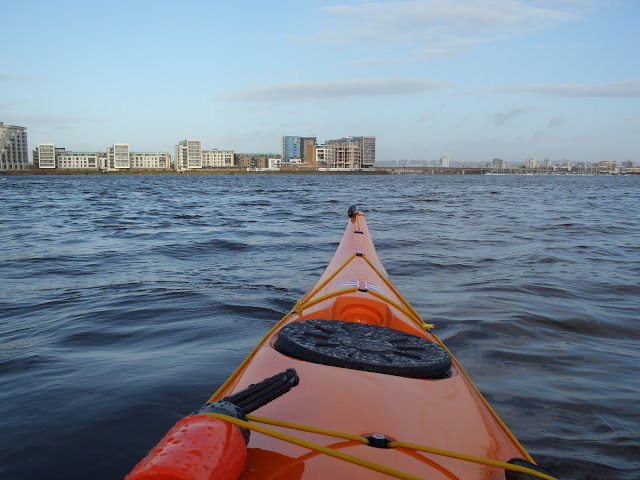 As soon as I pass the flats, the wind hits me, the water was relatively calm but the wind was strong trying to snatch my paddle from my hands. I stopped my boat to take this picture and realised I was being pushed along by the wind ( a little wake from my bow is evident in the picture above). A bit of practice turning in the wind and I head over to the yacht club. 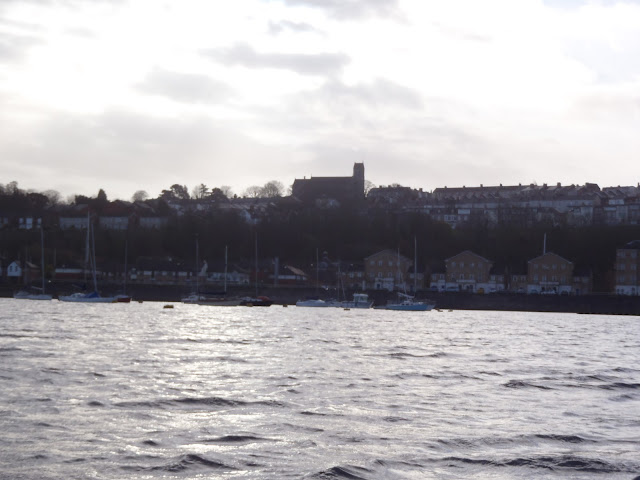 A bit of respite from the wind as I pass the yacht club and make my way to across the River Ely. I use the Ely embankment as a handrail and then turn to make my way towards the other side of the bay.  Back into the wind only this time it is coming side on and accompanied with slightly bigger waves, I practice trying to make progress without the skeg but its sooo much easier using the skeg so I give up on that one, the two yellow speed boats pass and their wake only adds to the fun coupled with a bit of clapotis sprinkled on top at the maintenance depot certainly spices this side of the bay up. 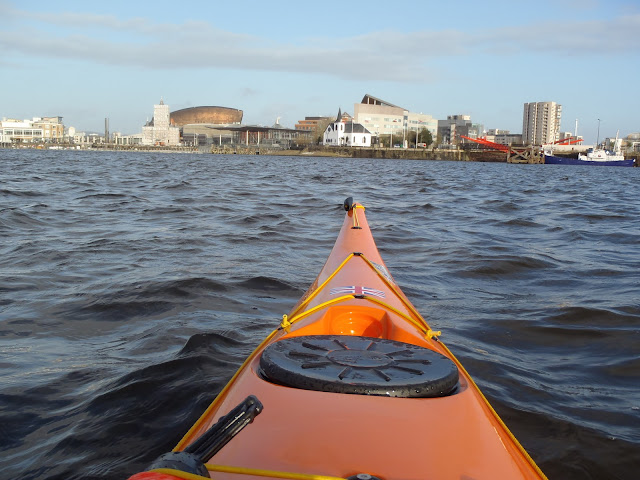 The wind drops in the lee of the St Davids Hotel so it's out with the camera again. The Port of Cardiff was one of the first to have a Norwegian Sailor’s Church established to provide spiritual and social care to thousands of Norwegian sailors that were employed in the Norwegian merchant fleet. The Church was founded by Herman Lunde of Oslo and built in 1868 between the East and West Docks on land that was donated by the Marquis of Bute. Over the years a number of building alterations were made, the most significant took place when a gallery and a bell tower were added in 1985.

During his childhood Roald Dahl and his family also worshipped here, in fact both Dahl & his sisters were christened at the Church. 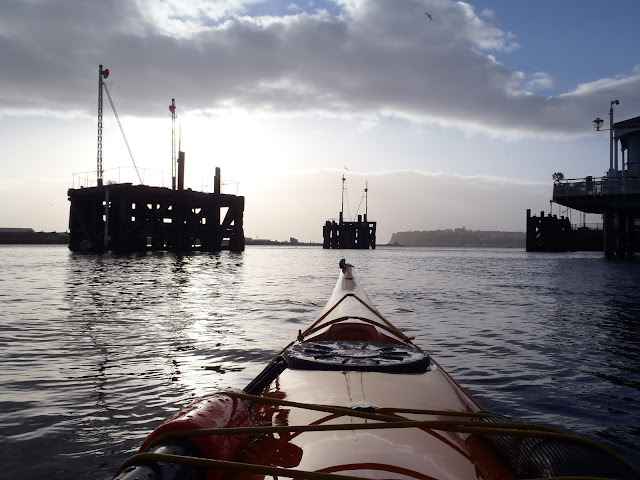 Looking at some relics of the past and enjoying the smell of freshly brewed coffee which is so evident at Mermaids Quay especially very early in the morning. 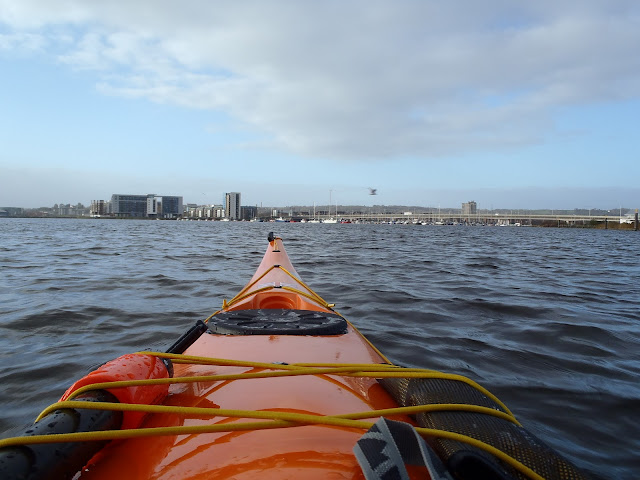 After one circuit I head back to the launch point, paddling again in calm water, its amazing the difference between one side and the other. 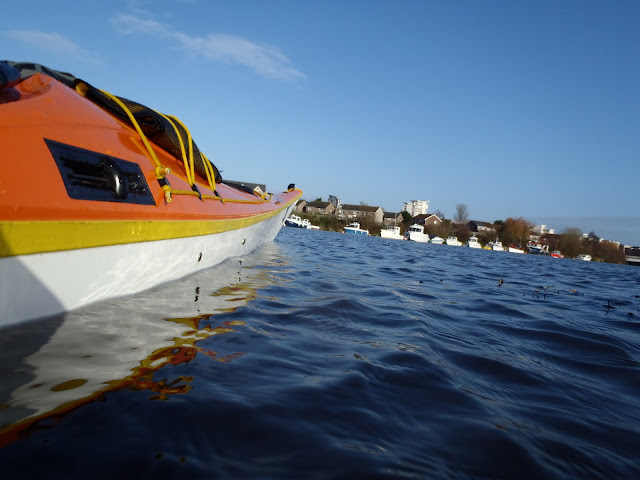 Before I get out I have a mess about with my camera exploring different shooting angles, I quite like this one although a bit of refinement is needed and maybe a spirit level. Glad to be back in my boat and also achieve what I wanted, can't ask more than that. One happy boater.
Posted by 51˚N Seakayaking at 12:12

Yes probably best to avoid the sea at the mo, there was no avoiding the conditions last weekend. Hasn't been great all year really. At least you managed to get out on the water.

Must admit I forgot to ask you along this weekend, Sorry Noel. My list of paddling pals is growing beyond my memory's capability :)

Will try & get you out this weekend, I'm sure I'll be doing something ;D